The PAM pathway is one of the most important cell signaling routes (i.e. the molecular circuits that control communication between and within cells). It involves three main factors: phosphatidylinositol-3-kinases (PI3K), protein kinase B (PKB or AKT) and mammalian target of rapamycin (mTOR), all of which exist in different isoforms.

This signaling pathway is central to a number of cell functions including proliferation, survival, motility, metabolism and angiogenesis [1, 2]. Physiologically, activation of the pathway occurs in response to an extracellular stimulus: binding of certain growth factors or ligands to their receptors at the cell surface causes activation of PI3K, which phosphorylates the membrane phospholipid PIP2 to produce PIP3, and leads to sequential activation of PDK1, AKT, mTOR complex 1 (mTORC1) and ribosomal S6 kinase 1 (p70S6K), an effector that ultimately stimulates protein synthesis and cell growth.

Given the plethora of intracellular functions it is involved in, the PAM pathway is unsurprisingly linked to cancer development, among other diseases. It is one of the most frequently altered pathways in all human cancers [3] and is estimated to be abnormally active in up to 45% of breast cancers (BC) [4]. In addition, PAM activation is also involved in resistance to various cancer treatments [5], supporting the general interest in pharmacologically inhibiting this pathway to treat cancer patients [6].

In September 2021, Diaccurate acquired from Merck KGaA a dual PAM inhibitor in clinical stage (M2698 now DIACC3010). By the second half of 2022, Diaccurate should start Proof-of-Concept phase II clinical trials with this sole-in-class drug candidate in incurables solid tumors and lymphomas.

Blocking tumor progression with inhibitors of the PAM pathway

Considerable efforts have been deployed over the past decades to develop compounds that target different members of the PAM pathway. The first PAM inhibitor used in oncology was temsirolimus, an mTOR inhibitor approved by the FDA in 2008 for the treatment of advanced renal cell carcinoma [7]. A few other inhibitors have also followed through to approval in cancer, but they represent a large minority compared to the number of compounds targeting this pathway that have undergone preclinical and clinical development. Indeed, most of these compounds present strong antiproliferative properties on cultured cancer cells and significant antitumor activities in animal models, but they most often fail during clinical development, mainly due to associated toxicities  but also to drug resistance mechanisms that arise from the activation of feedback loops and other compensatory pathways counterbalancing the inhibition of PAM.

But more recent inhibitors that target downstream effectors of the PAM pathway or inhibitors that are specific to certain isoforms of its central proteins PI3K and AKT display improved specificity and reduced toxicity [8]. These compounds represent promising combination drug candidates to overcome resistance and/or synergize with other anticancer treatments.

A unique dual PAM inhibitor that crosses the blood-brain barrier

DIACC3010 is a small molecule that specifically inhibits 2 out of the 3 existing AKT isoforms, AKT1 and AKT3, as well as p70S6K.

Extensive preclinical studies have demonstrated the potential of DIACC3010 in monotherapy and in combination with common anticancer drugs in breast cancer models.

Importantly, DIACC3010 presents several advantages over other PAM inhibitors with respect to both efficacy and safety:

Of utmost importance, pharmacokinetic and pharmacodynamic studies revealed that DIACC3010 is able to cross the blood-brain barrier, a rare property among anticancer drugs, and the reason why many advanced cancer patients with brain metastasis display a survival rate of less than a year [10]. In a human glioblastoma mouse model, DIACC3010 treatment resulted in significant prolongation of survival supporting the interest in this PAM inhibitor for the treatment of brain tumors and indications with a high prevalence of brain metastases, such as BC. 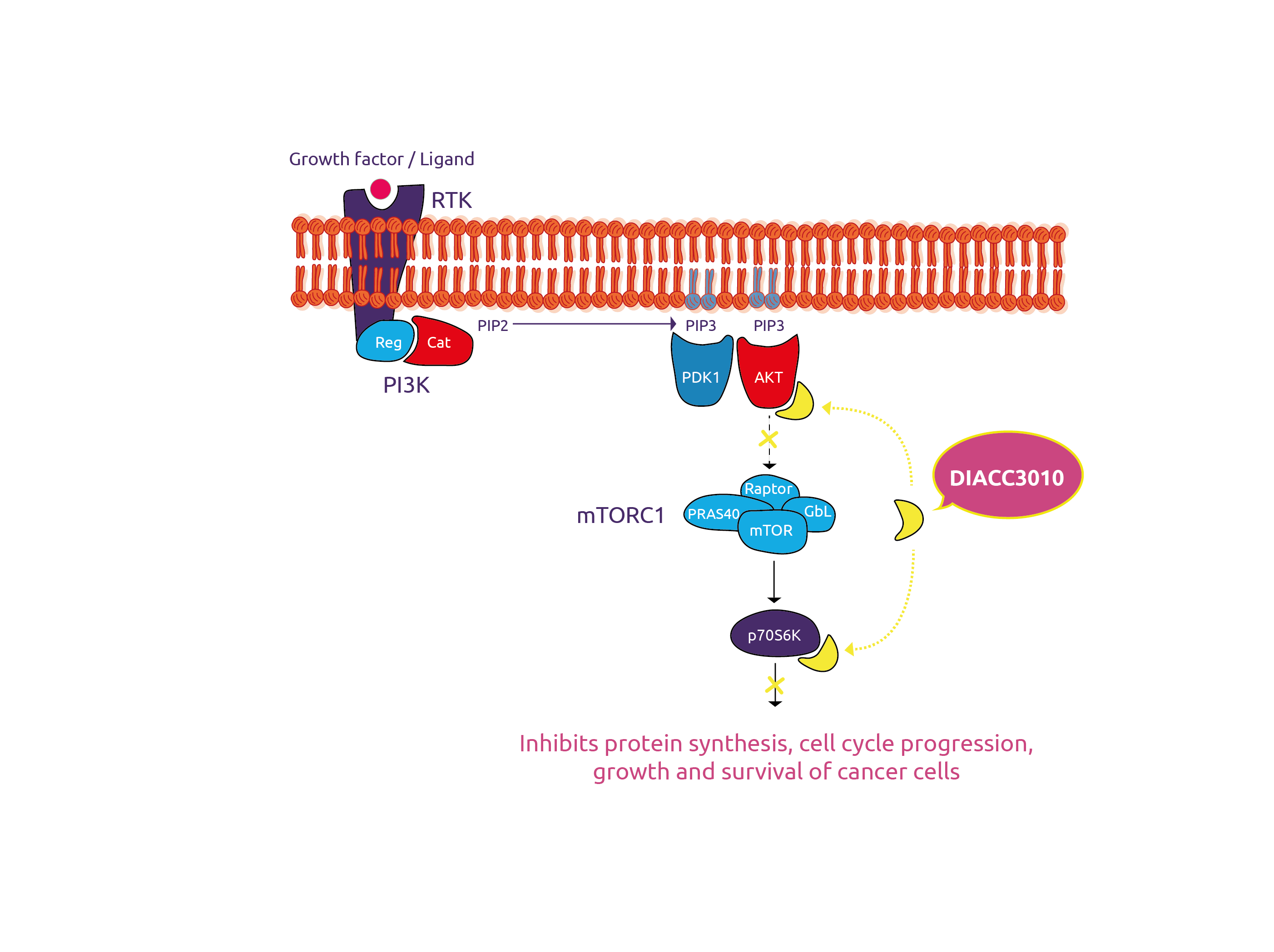 Solid preclinical studies with this compound strongly supported the clinical development of DIACC3010, for which a phase 1 trial has been completed in patients with advanced cancer who failed standard therapies [11]. DIACC3010 was well tolerated in monotherapy and potential biomarkers of pharmacological activity were seen in peripheral blood mononuclear cells and tumor tissues. Combined with trastuzumab or tamoxifen, DIACC3010 also demonstrated early signals of antitumor activity in patients with advanced breast cancer resistant to multiple standard therapies.

By the second half of 2022, Diaccurate should start Proof-of-Concept phase II trials in solid tumors enriched with PAM mutations such as stomach cancer, triple-negative breast cancer and aggressive lymphomas.